on June 09, 2011
So this is what happen…..
I was going to do a summer series about models living in Brooklyn and then I thought to myself “I am too old to be focusing on models!" That would have been fun and all but, I have better things to write about.
Instead I wanted to focus on something that is real and everyone can relate to regarding interracial relationships, even though some parents freak when they found out that their child is gay (which I would focus on in the future) parents still want to drop dead when they see their son or daughter dating outside their race.
The dolls I’m using in this story are Fashion Royalty Takeo and Alvin Ailey Barbie and the reason why I put these two together is very simple: they belong together!
Last year when I bought Alvin Barbie (who I named Addy) for my birthday, she looked like the kind of girl who is open minded about anything, she can be very sweet and a loving person to all who come in contact with her. I did not open her up for 2 months until Takeo came along! 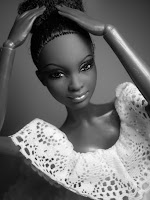 Now Takeo would kick anybody ass in a minute, only when he has too! But there is also another side to Takeo; he is tall, dark and handsome with a very devoted and trustworthy personality to match! He is somebody who will be your friend until the end! 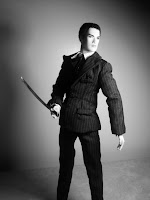 When I took Takeo out his box and play with him for a while, I soon after went to find Addy and de-box her as well. That’s when all the magic happened; Takeo and Addy became my IT couple in my doll collection, which means all my other dolls were very upset with me because Takeo was not in my house for a week and was already taken!
In the video next week, the story will be about Takeo and Addy’s first Christmas together and how things this summer will change for them! Please stay tune because the video will be up on YouTube in the beginning of the week!
alvin ailey Barbie Doll Stories Fashion Royalty Integrity Takeo Youtube