The Vampire Diaries: The show I forced myself to watch! Part 2 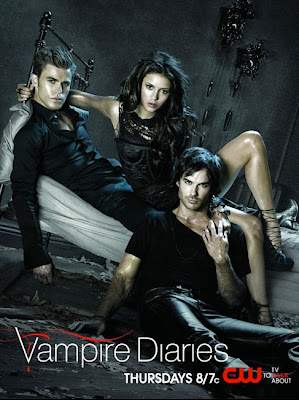 This is the 2nd part of this story again it's kind of long, so put your children, husband and pets to bed! Get some tea and snacks and enjoy reading!
The Vampires Diaries comes on the CW network every Thursday nights at 8pm. While I did watch some parts of season 1, season 2 had werewolf’s which I could pass on! The series is about a teenage girl Elena Gilber who falls in with Stefan Salvatore a vampire. Elena is soon caught in a love triangle with Stefan’s brother (Who I can’t stand) Damon. The Salvatore bothers are also being haunted by their past love Katherine Pierce, who makes the show a little worth watching!  The reason why the Salvatore brothers show so much affection towards Elena is mainly because she resemblance Katherine! While the story is based on Elena life in
﻿﻿

﻿
My problem with this show is I’m having a hard time finding any kind of connection with the characters; Bonnie Bennett who is a witch and Elena’s best friend is one of many characters who I tried so hard understand. In Season 1 which I think was the last episode Bonnie’s grandmother dies trying to help one of the vampires out, so in many ways you can not help but feel sorry for the girl. As season 2 started, I just totally fell out of love with her!

Caroline Forbes who is also a vampire was once almost kill by Katherine but, didn’t die because she has Damon blood in her! Caroline has a very antagonistic relationship with her mother, I think everyone can understand that because who hasn’t had an on going battle with their mother! After sometime you forget about Caroline and then when you do remember her it’s only because she in the circle of life with Elena, Stefan and Damon.

One character who makes me want to throw some holy water on him is Damon Salvatore! Damon is just one of those people in a story that you just have to hate and no matter how many times you try to like or even love him it’s not going to happen! While Stefan is the kind hearted brother, Damon is the charming evil punk who gets angry when nothing goes his way!

Although The Vampires Diaries has everything from a very deep love triangle, pretty witches and very handsome werewolf, I do not see myself being a fan! I only watch this show because again I’m giving Twilight a big break until next year!

I also think I can’t get into The Vampires Diaries because, we are all being overwhelmed with so many stories of vampires and everyone wants to make their money. Money plays a big part in all the books, movies and television shows. I’m pretty sure each author wants to share their story but, once you have your mind set on one story its very difficulty to open your mind on the next blood thirsty sucker or biter that comes along!