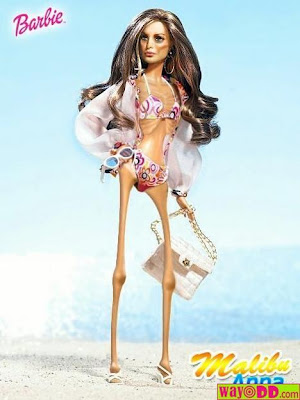 I just read that French shoe designer Christian Louboutin has had enough of Barbie’s cankles (ankles that blend into calves). Apparently, the designer has taken it upon himself to give Barbie an ankle lift and skinnier legs for the shoes he’s designing for her. “He found her ankles were too fat,” his spokesperson told Women’s Wear Daily.

Excuse me? If Barbie were a real woman, her body would be nonfunctioning, it’s so out of realistic proportion. According to iVillage.com, her feet would be a size 3, her bra size would be a 39FF and her measurements 39-21-33. She would stand 8 feet 9 inches tall. Her neck would be twice the length of a normal woman’s and would be so skinny, she’d have to choose between an esophagus and a trachea. The likelihood of a real woman having Barbie’s bod is less than one in 100,000.

I know, she’s just a doll. But for most little girls, Barbie is the first woman’s body they really get to analyze, besides their mothers’. Little girls (and little boys) are fascinated with Barbie because they can take off her clothes, check her out from all angles and get an anatomy lesson even though she’s missing certain vital parts. Barbie is a little girl’s first ideal — what she hopes to look like when she grows up.

Lately, plus-size models and actresses have gotten lots of attention, but “plus” starts at size 12 to 14! That means more than half of American women are plus-size; the average American woman is 162.9 pounds and size 14.

When plus-size model Lizzie Miller appeared nude in Glamour, smiling broadly with the slight fold of extra skin around her belly showing, the fashion world made a big to-do. I applaud her and the magazine, but her body still is smaller and more toned than the average American woman’s. Plus-size models don’t look fat. They look healthy.

Normally, I am not plus-size, but now that I am 31 weeks pregnant, I am. I know, it will come off after childbirth but that’s not the point. It irks me that I feel fat. I shouldn’t be embarrassed about being bigger than the sickly-looking women fashion wants me to idealize. If Barbie has cankles, mine must be elephantine.

For our daughters’ sake, parents must redefine what we consider beautiful. Talk to them about their body image and tell them they’re beautiful at any size.