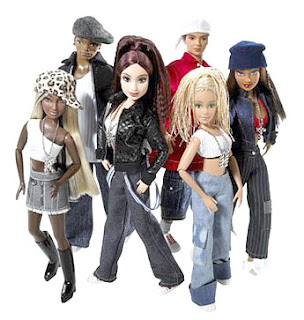 Let me start by acknowledging that I can't imagine what it must have been like for nonwhite kids to grow up never seeing or playing with dolls who looked like they did.

I'm talking about kids my age, who were little in the 1970s (or earlier) who had to search for a doll - or have a relative make a doll - who was black or Asian or Latina.

The fact that toy stores were overrun with little white Barbie dolls, as if all children were Caucasian, is ridiculous. (It occurred to me much, much later, that it was also odd that Crayola called that peach-colored crayon "flesh" as if all children had pinkish skin. And don't even get me started on "nude" pantyhose. Nude? For whom?)

Anyway, having said that, I suppose I should be glad that toy stores now feature shelves and shelves of "ethnic" (read: nonwhite) dolls.

Yet I'm still not thrilled with some of our toymakers' "progress."

Sales of Mattel's fashion dolls have fallen 60 percent or more since 2000, according to toy industry analysts. To combat that, Mattel, the world's largest toy manufacturer, has decided to revamp the image of their dolls, giving Barbie and homeboy Ken fresh new hip-hop looks in the form of Flava Dolls, which premiered last summer.

Sure, blond, corn-rowed Happy D is adorable, as is Tika with her boom box, but the girls, who both sport plenty of "bling bling" and come in bendable poses that are attitude-friendly, seem to be ready-made to just stand on a corner frontin'.

In fact, Mattel even provides a cardboard graffiti-strewn urban spot for the kids to hang out.

Seriously, there's no Malibu beach house or motor home for Barbie and Skipper this time around.

"Pull my street stand from the box so I have a spot to hang out," the ad for Flava Dolls proposes.

Is it me, or is this offensive?

So, hip-hop kids have nothing better to do than loiter? Couldn't Mattel have provided two turntables and a microphone? Couldn't these Flava Dolls be doing something creative? Couldn't they be spray painting on a canvas?

Mattel says Flava Dolls are about celebrating a "cultural phenomenon."