The Bratz are coming back! 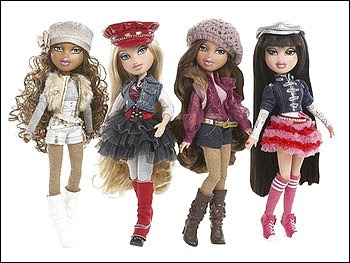 New Bratz dolls are heading to stores after a federal court overturned a ruling that their maker, MGA Entertainment, had to turn over the brand to Mattel Inc. Two new lines of the doe-eyed dolls should hit stores such as Toys R Us, Target and Walmart by the end of August.

Bratz, the pouty-lipped, provocatively dressed rivals to Mattel's Barbie, have been scarce as Mattel and MGA battled over their rights. Last week an appeals court overturned a lower court's ruling upholding Mattel's claim that Bratz's designer was actually working for Mattel when he created them and Mattel should get ownership of the trademark. The case may be retried.

MGA, which launched the doll 10 years ago, is shipping several new Bratz products:

- "Passion for Fashion" dolls that retail for $9.99 and come with extra clothes and accessories;

The new Bratz have less makeup and more ample clothing and are more flexible than earlier versions, said MGA CEO Isaac Larian. They have been in development since December, when the appeals court put on hold the order for MGA to hand over the trademark to Mattel.

The Bratz franchise was once worth as much as $1 billion and was MGA's biggest brand. But its popularity peaked in 2005 and sales have been sliding since. Meanwhile, MGA launched its "Moxie Girlz" brand. SpinMaster also introduced "Liv" dolls. And Barbie, who long ruled the roost of fashion dolls, has been experiencing a resurgence.

While Bratz will be at all major toy retailers, it is unclear how much shelf space they will get.

"I think retailers are going to expect some special accommodation to be changing their shelf space allocations at such a late date," said Needham & Co. analyst Sean McGowan.

MGA said retailers set aside shelf space for the line in January, however. And Toys R Us spokeswoman Kathleen Waugh said the new Bratz dolls are "being accommodated within the normal flexing of space in the fashion dolls area for the fall set."