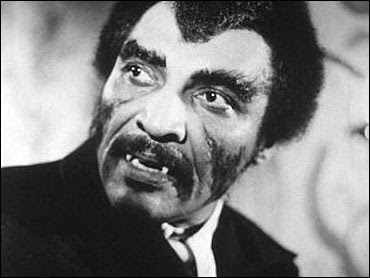 In 1780, Prince Mamuwalde (Marshall), the ruler of an African nation, seeks the help of Count Dracula (Charles Macaulay) in suppressing the slave trade. Dracula, who along with his other evils is revealed as a racist, not only refuses to help but also transforms Mamuwalde into a vampire (denigrating him with the name "Blacula" into the bargain) and imprisons him in a sealed coffin to suffer the un-ending thirst of the damned. Mamuwalde's wife Luva (McGee) is also imprisoned but, not being a vampire, dies in captivity

Almost two centuries later, in 1972, the coffin has been purchased as part of an estate by two gay interior decorators, and shipped to Los Angeles. The men open the coffin and become the vampire's first victims. Blacula then travels around the city and soon encounters Tina (McGee), who appears to be a reincarnation of his deceased wife, and begins stalking her. This brings the vampire to the attention of Dr. Gordon Thomas (Rasulala), who is helping Lt. Peters (Pinsent) with the investigation of the series of strange murders that is occurring, and whose girlfriend Michelle (Nicholas) is Tina's sister (by an unlikely coincidence. Tina and Michelle are also friends of Bobby, one of the murdered gay men).

The film continues as the vampire kills several more victims and hypnotizes Tina into falling in love with him. Meanwhile Thomas, Peters, and Michelle are following the trail of victims and come to realize that a vampire is responsible and Mamuwalde is their culprit. In the final scenes, the police shoot at Blacula and Tina; he is unharmed but she is mortally wounded. He saves her by turning her into a vampire, but Thomas, Peters, and Michelle find Tina and kill her with a stake through her heart. Distraught, Mamuwalde climbs up a staircase and onto a rooftop, into the sun to kill himself. Blacula melts in the light, and maggots suck his bones, and eat his flesh. 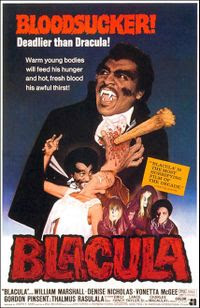