Kristen Stewart: 'I feel so boring' because being a 'Twilight' star has killed my social life 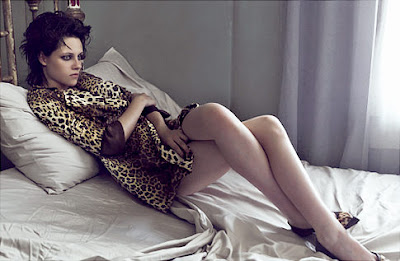 Bella Swan may be a wallflower, but actress Kristen Stewart can’t help but be the center of attention nowadays. “The sad thing is that I feel so boring because ‘Twilight’ is literally how every conversation I have these days begins - whether it’s someone I’m meeting for the first time or someone I just haven’t seen in a while,” she told Dennis Hopper in the October issue of Interview magazine. “The first thing I want to say to them is, ‘It’s insane! And, as a person, I can’t do anything!’ But then I think to myself, God damn it, shut the f**k up.
Stewart, 19, displayed her punk-rock side for the mag's photo shoot, sporting spiky, short hair, smoky eyes and a lot of leg in a short, cheetah-print coat and stilettos. The rebellious actress also makes a choice hand gesture in one shot. Even though she’s gotten used to biting her tongue, Stewart always seems to find a way onto the front cover of tabloids, especially when it comes to her possible relationship with heartthrob co-star Robert Pattinson. 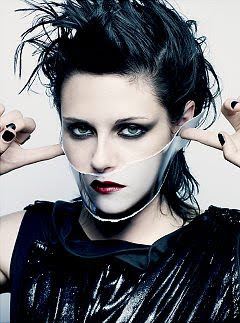 “I don’t talk to anybody about my personal life, and maybe that perpetuates [the attention], too,” she said, though lately she claims she doesn’t have much a personal life at all.“The only way for me not to have somebody know where I went the night before is if I didn’t go out at all. So that’s what I’m trading,” she told Hopper. “It depends what mood I’m in. Some nights, I think, ‘You know what? I don’t care. I’m just going to do what I want to do.’ Then the next day I think, ‘Ugh. Now everyone thinks I’m going out to get the attention.’ But it’s like, no, I actually, for a second, thought that maybe I could be like a normal person.
Bad as it may be, she’s got it easy compared to Pattinson, who was virtually mauled by fans while filming this summer in New York. But that comes with being part of the "Twilight" film franchise, which is based on the novels by Stephenie Meyer. The films have grossed $380 million internationally to date.Stewart also says she's getting a better understanding of her character, Bella, while filming the sequels. "You have to question their [Bella and Edward's] motivations - to watch two people so unhealthily devoted to each other," she told Hopper. "I stand behind everything that they do. I have to justify it in my mind, or else I couldn’t play the character. But they are definitely not the most pragmatic characters."The weirdest f**king themes run through this story - like dominance and masochism.
http://www.nydailynews.com/gossip/2009/10/02/2009-10-02_kristen_stewart_i_feel_so_boring_because_twilight_has_killed_my_social_life.html
________________________________________________________________
I don't understand where Kristen is coming from, but she had to know that this was going to happen being that Twilight had become so poplar all over the world! But the fans do get out of hand sometimes!
Kristen Stewart New Moon Twilight