Jason Wu and Colette: Ally of The Dolls

on July 14, 2009
Now that he’s one of American fashion’s wunderkinder, Jason Wu’s early work as a designer of doll fashions is an oft-told part of his lore. But even now that he’s got a pretty enviable set of life-size women clamoring for his clothes, the miniature mode is not a part of his DNA that he’s ready to jettison. His latest fantastic bit of fashion-clad plastic marks the debut of his Fall 2009 collection at Colette in Paris, which hit the store this week. (”The early bird gets the worm,” said Wu. Indeed!) “Sarah [Lerfel] came in to put in an order and saw a doll on my desk, and it just went from there,” explains Wu. “It’s just so perfect for Colette.” For his limited-edition Colette doll, which sells for €215, Wu chose look 20: a belted ivory cashmere coat with a fairylike feather-embroidered hem. “Doing a doll is like drawing a caricature,” Wu explains. “You don’t render all the details, just the most distinctive ones. That’s why it has to be a fun look.” Wu’s dolly days are actually still quite active. He’s doing another for Jeffrey New York, due out this August to celebrate the store’s tenth anniversary. Also in the offing is Wu’s most expensive doll yet—a $1,000 mini-mannequin. “We’re doing it for Japan, but I can’t say more,” he says.
—Meenal Mistry 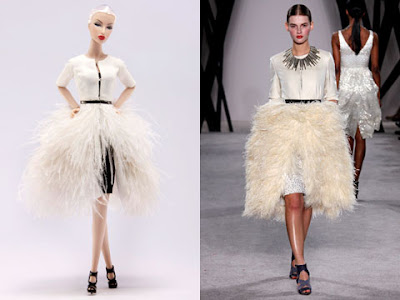