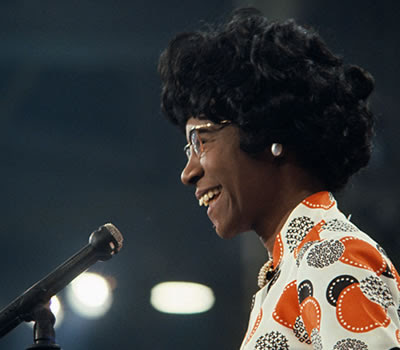 By the early 1970s, the advances of the civil rights movement had combined with the rise of the feminist movement to create an African–American women’s movement. —There can’t be liberation for half a race,” declared Margaret Sloan, one of the women behind the National Black Feminist Organization, founded in 1973. A year earlier, Representative Shirley Chisholm of New York became a national symbol of both movements as the first major party African–American candidate and the first female candidate for president of the United States. A former educational consultant and a founder of the National Women’s Caucus, Chisholm became the first black woman in Congress in 1968, when she was elected to the House from her Brooklyn district. Though she failed to win a primary, Chisholm received more than 150 votes at the Democratic National Convention. She claimed she never expected to win the nomination. It went to George McGovern, who lost to Richard Nixon in the general election. The outspoken Chisholm, who attracted little support among African–American men during her presidential campaign, later told the press: —I've always met more discrimination being a woman than being black. When I ran for the Congress, when I ran for president, I met more discrimination as a woman than for being black. Men are men.”
http://www.history.com/genericContent.do?id=61718&milestoneid=33
Black History Month