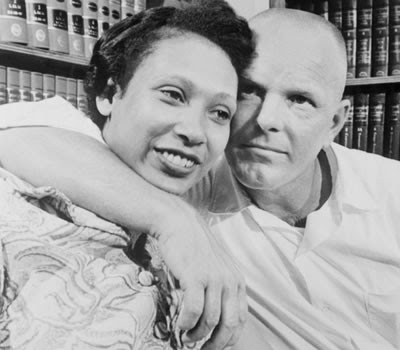 Loving v. Virginia – April 1967
Soon after getting married in the District of Columbia in 1958, high–school sweethearts Mildred and Richard Loving returned to their hometown in Virginia, unaware that the state was one of 16 in the U.S. at the time with laws prohibiting interracial marriage. Mildred, a half–black, half–Native American woman, and Richard, a white man, were in bed on July 11, 1958, when police burst into their home. Charged with unlawful cohabitation, the Lovings pleaded guilty to violating Virginia’s Racial Integrity Act; a one–year prison sentence was suspended when they agreed to leave the state for 25 years. Back in D.C., a frustrated Mildred Loving wrote to the American Civil Liberties Union (ACLU) for help: —We know we can’t live [in Virginia], but we would like to go back once and awhile [sic] to visit our families & friends.” In 1964, a landmark year for civil rights legislation, the ACLU took on the Lovings’ case, which went all the way to the U.S. Supreme Court. In April 1967, the Court ruled unanimously that long–standing state laws against miscegenation—the last segregation laws on the books—were in violation of the Constitution. Chief Justice Earl Warren, who had also written the court’s opinion in 1954’s Brown v. Board of Education, delivered the majority opinion, affirming that —We have consistently denied the constitutionality of measures which restrict the rights of citizens on account of race.” Some southern states, however, were extremely slow to change their constitutions to reflect the Court’s ruling in Loving v. Virginia: Alabama became the last state to do so in 2000.
http://www.history.com/genericContent.do?id=61712&milestoneid=30
Black History Month