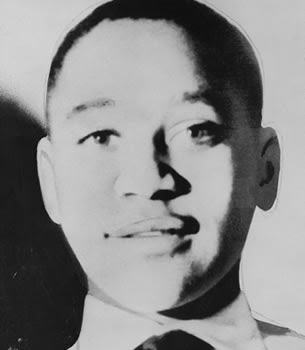 Emmett Till - August 1955
In August 1955, a 14–year–old black boy from Chicago named Emmett Till had recently arrived in Money, Mississippi to visit relatives. While in a grocery store, he allegedly whistled and made a flirtatious remark to the white woman behind the counter, violating the strict racial codes of the Jim Crow South. Three days later, two white men—the woman’s husband, Roy Bryant, and his half–brother, J.W. Milam—dragged Till from his great uncle’s house in the middle of the night. After beating the boy, they shot him to death and threw his body in the Tallahatchie River. The two men confessed to kidnapping Till but were acquitted of murder charges by an all–white, all–male jury after barely an hour of deliberations. Never brought to justice, Bryant and Milam later shared vivid details of how they killed Till with a journalist for Look magazine, which published their confessions under the headline —The Shocking Story of Approved Killing in Mississippi.”
Till’s mother held an open–casket funeral for her son in Chicago, hoping to bring public attention to the brutal murder. Thousands of mourners attended, and Jet magazine published a photo of the corpse. International outrage over the crime and the verdict helped fuel the civil rights movement: just three months after Emmett Till’s body was found, and a month after a Mississippi grand jury refused to indict Milam and Bryant on kidnapping charges, a city–wide bus boycott in Montgomery, Alabama would begin the movement in earnest.
http://www.history.com/genericContent.do?id=61690&milestoneid=16
Black History Month